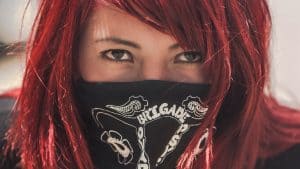 It’s said to be dangerous to bike in the streets of Eastside Los Angeles at night. Yet the Ovarian Psycos, a feminist cycle brigade of non-conformist women of colour, aren’t easily intimidated and reclaim the public space from those who fail to share it. The two young female directors of the film describe their concept as follows:

„We wanted to create an all-out-super-heroine story. A story where confident, unwavering young women – the Ovas – take back the streets en mass, on bikes, shouting in the face of convention. But once we started production the film took a turn. The real super-heroine work was happening behind the scenes, in daily life, within their personal relationships as mothers, daughters, and sisters. We discovered working class young women who were strong but vulnerableFeminism isn’t something the Ovas choose, but it has been inherited. Inherited from growing up within the context of colonisation, immigration, racism, misogyny and gendered violence. These were women dramatising power and freedom on their bikes, at night, publicly in the streets, and at the same time struggling to hold onto that same power as single mothers, aspiring artists, students and working women.