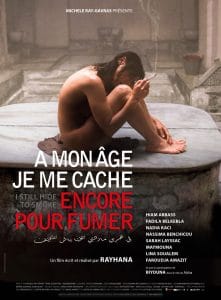 I Still Hide To Smoke is one of the few feminist films from the world of Arab cinema that dares to break taboos and oppose radical Islamism. Based on Rayhana’s hit play the film revolves around the life and suppression of women in Algeria. Nine women of different ages and backgrounds come together inside a Turkish bath, a refuge away from patriarchal society’s watching eyes and scolding tongues. Within these walls the women openly share their stories about pregnant virgins, assassinations, forced marriages, pubic hairstyles and the Koran. The narrative focus rests with Fatima (Hiam Abbas – The Syrian Bride, Lemon Tree), the strict lead masseuse of the Hammam, who is loved and feared by young and elderly women alike. Fatima is trying hard to keep the place free of politics, but eventually can’t prevent two women from clashing.

During the nineties radical Islamists threatened Rayhana with death. The actress, director and playwright was forced to leave her home country to seek exile in France. „I Still Hide to Smoke“ is the first play she wrote in French. When adapting the play the producers insisted to film in Arabic to underline the fact that „this was her story“.

The scenes taking place in the Turkish bath have been filmed at the Bey Hammam (built in 1444) in Thessaloniki.