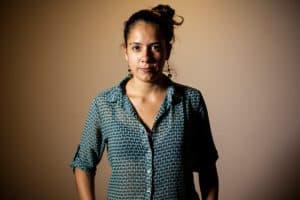 Adriana was always the director’s favourite Aunty. A confident woman who had settled in Australia, one day in 2007 she is suddenly arrested while visiting her family in Chile and accused of having worked for dictator Pinochet’s notorious secret police, DINA. The aunt denies these accusations. Her niece sets out to investigate Adriana’s history and begins filming. By 2011, her investigations are beginning to expand more and more, but then her Aunt suddenly takes flight, just before a trial. Adriana asks her niece to interview her former colleagues who will be able to confirm her innocence. The film reveals long buried conflicts within the family which reflect the social problems of the country as a whole. The filmmaker’s research into DINA provokes tension between the generations – is Adriana refusing to talk about the past, or is something preventing her from doing so? An extremely personal debut in which Lissette Orozco manages the difficult balancing act of maintaining her role as both niece and filmmaker. By showing the film shoot, she addresses the act of filmmaking itself. And as she moves forward, layer by layer, her personal life unwittingly becomes political (Berlinale)