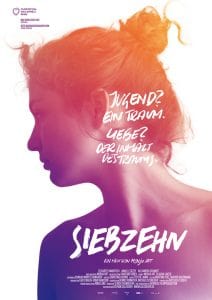 Ground-breaking conversations on the bus followed up by last minute homework revisions and that moment of awkward silence, as the teacher insists on doing a question and answer routine. Within a few moments Monja Art has catapulted her viewers into the daily life of seventeen year old Paula. In the middle of nowhere rural Austria, far far away from big city hipsterism, where nights are spent in places called Shake or Up and college girls wear uniforms, French whiz Paula develops a crush on shy yet curious Charlotte. The feeling is mutual, but of course there’s a catch. Charlotte is already engaged to Michael. Enter the emotional rollercoaster ride! To distract herself Paula jumps into bed with Tim and messes around with bicurious Lilly. Yet being the sort of romantic she is, Paula can’t help but keep pining over Charlotte.
Despite all the heartache at stake Monja Art manages to to capture the pain of first love without resorting to false sentimentalities. Thanks to her ironically charged miniature depictions of everyday life the director succeeds in intertwining the romantic drama with the genre of social study counterbalancing the dark-romantic emotions of her neatly dressed college girls.