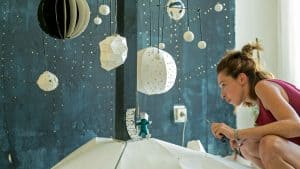 It’s summer break! Stage manager Miriam is eagerly awaiting the return of her cosmonaut girlfriend, as an encounter with an astrologer leads to a change of course. According to the stars their romantic liaison is doomed for failure and Miriam would much rather match with people born on the 19th of January, 1985. With three names written on a piece of paper in her pocket Miriam sets out to find that one person she is apparently destined to be with.