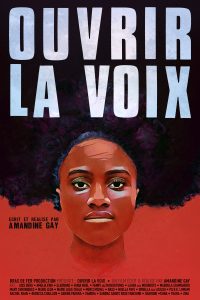 “If you want different roles, you’ve got to write them!” This is the advice given to actress and film maker Amandine Gay by a friend and casting agent as she keeps getting offered stereotypical roles. But soon she realizes that even as a screenwriter, her influence is quite limited. She keeps running into old-fashioned clichés, conformist producers and glass ceilings – until she’s had enough and, in response to the structural racism within the French film industry, creates her first documentary “Speak Up”. In this afro-feminist manifesto, Amandine Gay gives a voice to the black female perspective, letting black women from Belgium and France talk about their day to day experiences of discrimination, prejudice and the interweavement of racism and sexism. The film focusses on the women’s collectively experienced discrimination and their struggle to claim back their own narrative. “Speak Up”, although created two years before the murder of George Floyd, makes an important afro-feminist contribution to the current Black Lives Matter movement, showing that racism, sexism and homophobia are still far from being overcome in the 21st century.