No Straight Lines: The Rise of Queer Comics 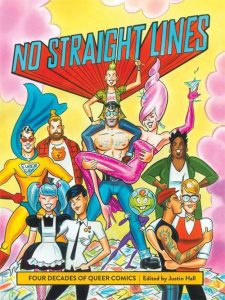 “It wasn’t until I discovered Alison Bechdel’s ‚Dykes to Watch Out For‘ that I really understood what I was looking for, a queer world with stories and characters that I could recognize, that I could laugh with and care about.” (Lana Wachowski, 2011)

Nowadays, almost everyone has heard about American comic artist Alison Bechdel’s “Dykes to Watch Out For”. But it was a long way – from the ban of homosexual characters in mainstream comics through the Comics Code Authority between 1954 and 1989 – to the sensational upset of Bechdel’s graphic novel “Fun Home”, which has even made it onto the stage as a musical.

Vivian Kleiman’s loving tribute to the world of drawn stories and their creators delivers a touching genealogy of queer comics that digs surprisinlgy deep into queer history. The stories are just as diverse as their creators, ranging from more queer-specific topics like AIDS and job discrimination to universal themes like the search for love – or the importance of a good haircut.

From a long list of artists that were marginalized for a long time, even within the underground comics scene, the films presents Alison Bechdel, Howard Cruse (Gay Comix), Mary Wings (Come Out Comix), Rupert Kinnard (Brown Bomber an the Diva), and Jennifer Camper (Rude Girls and Dangerous Women), whose works are inspiring readers and new generations of comics writers.