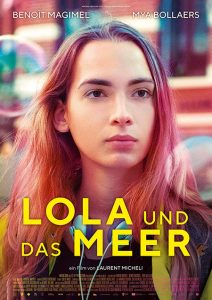 Lola is 18, has pink hair and is working to get her diploma as a veterinary assistant. When her mother dies, Lola’s father Philippe, who still can’t accept that his “son” is trans, makes sure she doesn’t make it to the funeral service. Nevertheless, Lola resolves to fulfill her mother’s last wish and scatter her ashes along the Belgian coast.

Reluctantly, father and daughter embark on the journey together. Being forced to get along, they become closer than both of them expected, despite painful battles of words and disturbing realizations.

Mya Bollaers does a wonderful portrayal of Lola, playing her part with a translucency that reveals her character’s emotions without saying a word. For this performance, she was awarded with the Belgian Film Award as the first openly transgender person. In total, the film received seven nominations at the Magritte Awards and one for the French César as “Best Foreign Film”.