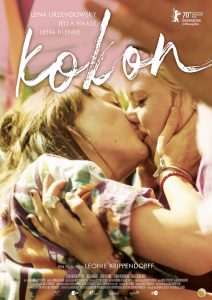 It’s a hot summer in Berlin-Kreuzberg. In the multi-cultural cosmos around Kottbusser Tor, 14 year old Nora breaks her way to adulthood. She gets her first period and upon meeting wild Romy, discovers her love for girls. Together they turn the city park into a forest, the swimming pool into an ocean and the sandpit into a beach. But will she still have eyes for all that beauty when she suffers her very first heartbreak?
Director Leonie Krippendorff describes her film as an important story that shows us how liberating it can be to strip off media-made body images and instead, for the first time, feel one’s own self. Leonie Krippendorff’s coming of age drama succeeds in doing this not only thanks to the director, but also thanks to the great cast. The biggest name on the set is Jella Haase (Romy).

The greatest new discovery Lena Urzendowsky, who takes the viewers along on her character Nora’s journey as she marvels at the wonders of the world around her, discovering beauty in the ugly.