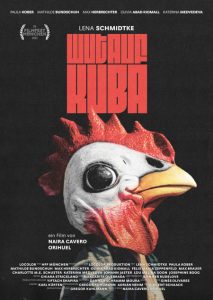 Summer vacation with the whole family—a nightmare for 17-year-old AJ, who is to spend seven days with her single mother and the rest of her unbearable clan, without Internet and in a boring caravan vacation park on the British coast. AJ mentally prepares for the worst. Her mother has no problem with her daughter being a lesbian, but can’t help but comment on AJ’s choice of clothing and appearance defying female role clichés. A casual remark about AJ’s boyish style of dress throws AJ into a moderately severe identity crisis. Nothing seems to fit her anymore. Neither sweaters nor dresses can express who she really is. AJ keeps drifting into passive-aggressive rebellion, hiding behind sunglasses and a hat and covering her body with loose shirts and pants. It is not until she falls in love with Isla, a lifeguard her age who is not really her type, that AJ’s horror trip turns into a dream vacation.

Marley Morrison’s delightfully bizarre coming-of-age comedy won the Audience Award at the Glasgow Film Festival and was nominated for five British Independent Film Awards and celebrated by the press as one of the best British films of the year. Its lead actress, wonderful newcomer Nell Barlow, won the award for Best Performance at Outfest in Los Angeles. With her feel-good movie Sweetheart, Morrison succeeded in capturing the conflicts and zeitgeist of a young, queer generation.