Seven years of work went into Barbara Wallbraun’s film “Uferfrauen”, during which the film maker lived partly off welfare and received hardly any financial support. The latter is not unusual for queer stories. Nevertheless, she found six women – each of them in their own way endearing, witty and charming – who were willing to share their stories. The women show us their daily lives and tell us about the difficulties but also the beauty of their “socialist” past. According to Katja Briesemeister of Lesbisch Schwule Filmtage Hamburg “the women talk in a way that is as thoughtful as it is sassy about their fight for self-determination, their first loves, unconventional family planning as well as conflicts with the SED (Socialist Unity Party of Germany) and the law. We hear about the deterrent effect of the “Berlin ban” and the Stasi surveillance, but also about secret parties and emerging networks.” 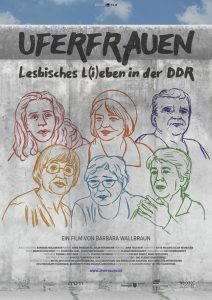 Or as Lea Gronenberg of Filmlöwin put it very accurately: “The message of ‘Uferfrauen’ is powerful and encouraging: In a hostile environment, these women managed to survive, find love and defeat a repressive system. And they are willing to defend this progress against a rollback in society.”