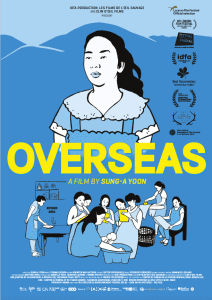 Every year the Philippines send over one million of their citizens abroad for temporary work assignments. Many of them are deployed in countries of the Middle East, where obstacles for entering the job market are comparatively few. The women are often employed as domestic workers or nursemaids. Since the workers have to leave behind their family and children, they send part of their wages back home, which gives them an important role in their country’s economy. Rodrigo Duterte, the infamous President of the Philippines, recently referred to these overseas Filipino workers as “new heroes of the economy”.

In her film “Overseas”, director Yoon Sung-A portrays one of many training centers for housework, where a group of young Filipinas prepares to face homesickness, mistreatment and abuse. In role playing exercises, they take on both the roles as employees and of their future employers. The instructors draw on their own experiences, thus amplifying the authenticity of the training. “Overseas” takes a brutally honest look at the misery of modern slavery. The women’s determination to develop survival strategies and their solidarity with each other allow for a spark of hope in this sinister hidden reality of our globalized society.

The short film „Portrait Of My Mother“ is shown as a supporting film.