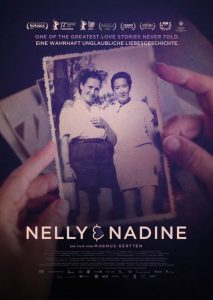 „One of the greatest love stories never told“

Nelly and Nadine fall in love on Christmas Eve of 1944 during an aria from „Madama Butterfly“ sung by Nelly, an opera singer from Brussels. Nadine had previously lived in the lesbian Parisian Bohemia around Natalie Barney.

They spend this Christmas Eve in the Ravensbrück concentration camp, where they are imprisoned for taking part in the resistance.

Nelly keeps a secret diary, harrowing and poetic at the same time. They are separated and Nelly is transferred to another camp. Yet they manage to survive and reunite after the war. Together, they start a new life in faraway Venezuela. Nadine takes Super-8 recordings of Nelly and the couple’s colorful circle of friends in Caracas.

Diaries, films, photographies … and yet the story of Nelly and Nadine almost went unnoticed. Nelly’s family had kept it unread and unseen in a box in their attic. And even Nelly’s granddaughter Sylvie, for a long time, did not dare to tell it.

Malmö, late April 1945: survivors from German concentration camps arrive at the harbor in Sweden. Decades later, Magnus Gertten, the director, discovers the archive footage. He is intrigued by the rescued people’s faces and tries to learn more about their identities and lives. One of the rescued survivors is Nadine.

Magnus Gertten visited Sylvie Bianchi in northern France and accompanied her on this path of a previously untold story. A touching documentary.