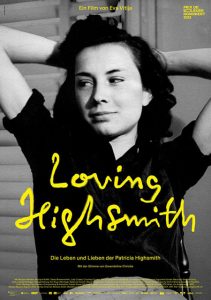 Patricia Highsmith has created works of world literature with novels like “Two Strangers on a Train” and “The Talented Mr. Ripley”. Her film adaptations have reached a huge audience, but the master of psychological suspense keeps guarding her private life carefully. Not even her family knows that she loves women. So she publishes her lesbian romance novel “The Price of Salt”/”Carol” in 1952 using a pseudonym. It is the first US-american novel with lesbian characters that neither convert nor die. She writes about her own troubled love life in her diaries and notebooks that are discovered in a linen closet in her home in the Swiss Ticino after her death. Based on these notes, which were first published on the author’s 100th birthday in the fall of 2021, director Eva Vitija tells of Highsmith’s loves and passions.

In the original German version, passages from Highsmith’s diaries are read by Maren Kroymann and juxtaposed against interviews with former girlfriends and family members of Highsmith, as well as scenes from world-famous film adaptations of her novels. Vitija’s multi-layered love biography takes us into a realm of longings and obsessions, shedding new light on one of the most enigmatic female authors of the 20th century.
“Loving Highsmith” is also a portrait of a generation of women who found the courage to stand up for their right to love thanks to Highsmith’s “The Price of Salt”/”Carol”.