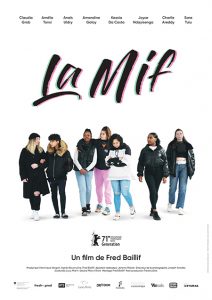 „Who are you? – „The punk queen in the land of assholes.“

It’s just another day in a youth center in Switzerland for seven residents aged 13 to 18, who struggle with very different problems. The young women’s clashing tempers cause numerous crises and conflicts, but when it comes down to it, they have each other’s backs. La Mif is French youth slang for “family”, and one theme throughout the film is the question of what constitutes a family – and what happens if you don’t feel safe in your family?

Director Baillif, who was a social worker for many years, worked with amateur actors for his film. Over a period of two years he exchanged ideas with the girls, whose real-life stories became part of the plot. Their stories are like splinters that come together in a dazzling kaleidoscope.

The power of the actors and the camera work, which often throws the viewer into the center of action, are reminiscent of British or French social drama films.

The film received the Grand Prix of the International Jury for Best Film in the Generation 14plus competition at the Berlinale and the Golden Eye Award of Zurich Film Festival.