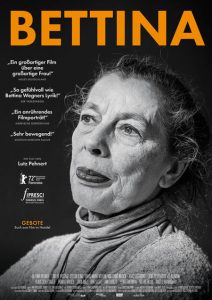 Bettina Wegner was born in West Berlin in 1947 and grew up in East Berlin. She was expatriated at the age of 36, feeling uprooted ever since. The singer-songwriter’s career is one of the most thrilling life stories of the 20th century.
As a child she strongly admired Stalin, as a teenager she wanted to help shape society with her songs, and later on becomes a passionate artist with an unwaveringly humanistic attitude. At the age of 21, Bettina stands trial for protesting against the violent suppression of the Prague Spring and is eventually sentenced to 16 months in prison. Throughout her entire life, her relationship with the GDR is marked by conflict, criticism and her desire to hold on to her homeland. Her love of her native country persisted even after being forced to emigrate in 1983.
Her song “Über Gebote” from 1980 serves director Lutz Pehnert as a guide through Wegner’s life. He uses archival footage from East and West Germany, audio recordings from her trial as well as Wegner’s own words and music. In this way, the film gives a new audience the chance to discover singer-songwriter Bettina Wegner, who simply wanted to sing love songs and understood like no other how to combine politics and private matters in her lyrics.