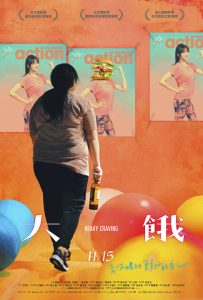 Pei-Ju Hsieh’s fictional film debut is a dramedy focusing on women’s issues such as body shapes, eating pleasures and sexual harassment.
Beautiful Ying-Juan (Jia-Yin Tsai) is 30 years old, weighs nearly 230 pounds and works as a cook in her mother’s kindergarten. Self-confident Ying-Juan, lovingly called “dinosaur” by the kids, for a long time remains immune towards society’s promises of self-optimization and body-normativity. Only when her ambitious mother threatens her, she decides to try a diet program.
Her unexpected friendships to Wu, a smart dispatch driver who hides a secret behind his smile, and Xiao-yu, who would rather wear girls’ clothes, keep her going for a while. But gradually, the radical diet starts to take its toll. Ying-Juan loses not only her love for cooking and her zest for life, but also her sense of taste. She ends up in an inexorable downward-spiral, while the façade of the smooth advertising and media world around her is starting to crumble.
“Heavy Craving” is a brightly colorful and rigorous comment from Taiwan on body images, idealized body shapes and self-discovery.
“Heavy Craving” won the Viewer’s Choice Award and the Best New Talent Awards at the Taipei Film Festival. The film also received prizes at the Taipei Golden Horse Film Festival and the Vancouver International Women in Film Festival.

We use cookies to optimize and continuously improve our website for you. By using the website you're confirming that you're happy to accept our use of cookies. You can find out more about the cookies and how we use them in our Datenschutzerklärung.